Kalpuregan village in the south east of Iran. The only characteristic that distinguishes Kalpuregan from other areas is its indigenous pottery, creation of civilization by Baluchi women artists. According to one of the village elders, manufacturing practices dating back to about 4 to 6 thousand years ago still remains intact. The only workshop that is still active and persistent to continue working with primitive method is Kalpuregan pottery workshop.

Kalpuregan village in the south east of Iran. The only characteristic that distinguishes Kalpuregan from other areas is its indigenous pottery, creation of civilization by Baluchi women artists. According to one of the village elders, manufacturing practices dating back to about 4 to 6 thousand years ago still remains intact. The only workshop that is still active and persistent to continue working with primitive method is Kalpuregan pottery workshop.

Throughout the history the art of pottery in Kalpuregan has belonged to women since men had the burden of hunting or farming. According to historical evidence, indigenous women are creators of pottery art. In this land, delicate tasks are done by women and men only have the responsibility of preparing and firimg the clay.

Another thing that distinguishes pottery of the region from other parts of the country is that women in Kalpuregan do not use pottery wheel to make pottery. It is amazing that such a magnificent work is possible only with traditional and innovative methods and the help of rural women's loving cracked hands. Potteries in this area learn this art from their mothers or clan women.

Paintings on pottery are abstract symbols that remained from generation to generation and indicate the artist’s beliefs and spiritual desires of her surroundings. Often symbolic paintings are similar to early prehistoric pottery. Indigenous artist women in this area believe they should use simple and abstract geometric patterns to paint pottery pieces exactly like their Ancestors

Soil is provided from “Mashkootan” clay mine about 2 to 3 km from the workshop.

To prepare the clay, men first sift the soil to separate the impurities. Then, they shed it in a 2 floor pool of water and stir up until particles are suspended in the water. The resulting grout is then filtered and transferred to the second pool below the first one.

Grout is kept in the second pool for two days until the water evaporates. Once clay has been kneaded,   it is shaped, dried and fired. Clay is usually gray to light green but it becomes orange after baked in kiln. Preparing clay is done by men while shaping it, which is handwork and requires precision, is done by women artists of Kalpuregan.

A dye obtained from local stone "Teytook", which is soluble in water, is used for painting on pottery. Glaze is not used in decorating Kalpuregan pottery. The artist grinds Teytook on a large boulder with a hollow in the middle while pouring water to make a grout.

The practice of grinding dissolves the particles in water. Then, the artist uses a small stick, usually made of palm tree wood, to paint on pottery.

Finally she puts molded clay under the sun for 10 days to dry. Before going into the kiln, clay is painted with Teytook dye. This way the clay and color are fired at the same time.

A sample of Kalpuregan traditional pottery

Watching this pottery plate is like walking in palm groves of Kalpuregan village. Kalpuregan potteries are inspired by nature for making and painting this plate. The pattern used to embellish this plate is called “Chat”. In Baluch dialect Chat means palm tree branch, so this plate shows a close connection between the palm tree and Baloch people. The palm tree is also a symbol of the sun. At the center of this plate is a rhinoplasty pattern that looks like a swastika which is the symbol of sun, fire and immortality in Persian culture. 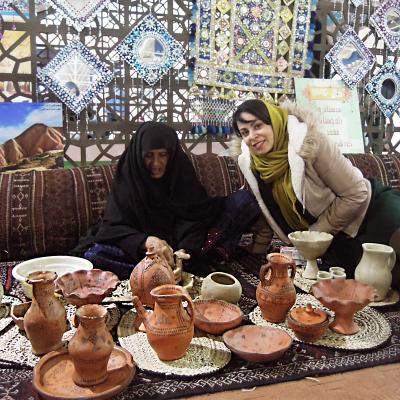